Email ThisBlogThis!Share to TwitterShare to FacebookShare to Pinterest
I've been debating about writing this story because I've never been big on self promotion but I think after a few months, I do have the right to be proud of this accomplishment.

So here's the story.  My father has been one of the organizers for a small sprint triathlon held in late May.  He had suggested I try competing in it a few times but I never really felt the desire to do so.  I was not exactly triathlete material.  I was am overweight, couldn't run any distance, and didn't know how to distance swim.  Over the winter while talking with Rory (a riding buddy), we decided to give it a shot.  Neither one of us were runners, and neither one of us had any clue how to swim distance.  At this point, the only part of it that I had any confidence in was the bike ride.  I may not have been the fastest bike out there, but I knew finishing a 20k bike ride was not going to be an issue for me.  The swim and the run however had me quite worried.

Over the last 2 years, in the winter to try and keep some fitness when the snow kept me off my bike, I had been doing some light running.  Unfortunately I had never worked my way up to the 5k required for the tri.  My outlook for swimming was even worse.  I have never done lane swimming in my entire life.  I knew how to swim, or rather not drown, but actually making any kind of time or distance was a foreign concept to me. 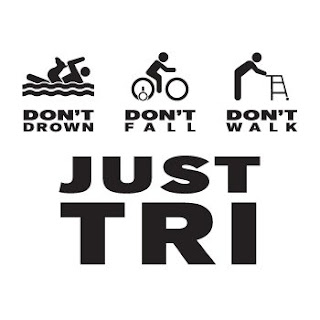 So over the winter I start working on my running, doing 2-3 runs per week, staring with a mix of run and walk, gradually increasing the running until I was doing very little walking.  Unfortunately as May approached, I was still only able to do around 4k at a time, but figured I could grind out the last 1k if it came down to it.

At the same time I started hitting the pool.  My wife is a swimmer so she came along to show me how to do it.   My first lap I realized I might be in trouble.  I didn't know how to breath properly, kick properly, or even stroke properly.  But after a few trips to the pool I was able to start doing some distance comfortably.  Before I knew it I was able to do the required 750m in under the required 30 minutes.  Not by much, but under the limit.  I was feeling pretty good about the swim portion, confident about the bike, and only mildly nervous about the run.