RACING: Ironman Canada through the eyes of an amateur athlete

Email ThisBlogThis!Share to TwitterShare to FacebookShare to Pinterest
Paulette Dalton recently competed in her third Ironman Triathlon at the Subaru Ironman Canada in Penticton BC.  She competed along side her father Paul Dalton, and this is her story. 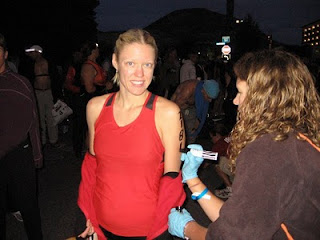 Everyone was weary about the weather and even a bunch of tents blew over in the expo Wednesday afternoon and registration/check-in had to be closed down for a bit b/c the winds were too strong! The normal Penticton weather of 35+C was replaced with 15C! 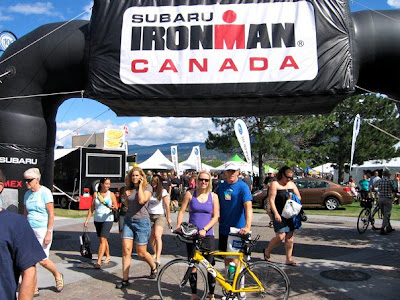 Felt good during the swim, aside from a few knocks on the head, which is to be expected with a 3000 person mass swim start! I came out of the water @ 1:26 (7 minutes faster than last year). 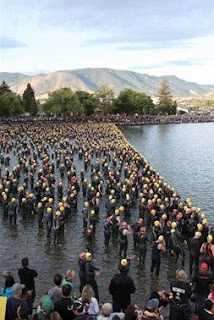 
My strategy for the bike was to conserve in the first half to save my legs for Yellow Lake and of course the marathon. This strategy was fine until I hit the 60k/h head wind around 130Km in which slowed my average pace wayyyy down. I heard the pro's were met with rain, wind and HAIL! I also heard some of them stopped at the top of Yellow Lake to get emergency heat blankets to wear around their shoulders before descending the mountain! Looking back maybe I should have pushed it a bit harder in the early part of the bike ride when I had the wind in my favour. I was a bit disappointed with my bike time, but it is what it is and you can't always control the weather. 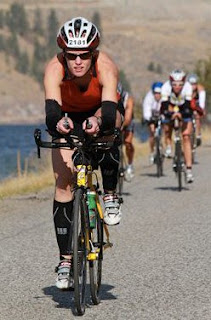 My favorite! Nobody passes me on the run :) This is where I made up most of my time and finally passed Dad! (It also helped that I speed through my transitions!). Just past mile 12 I was figuring I'd see Dad soon on his way back into town, but then I looked up and realized he was just a head of me. Just the motivational push I needed to push past the half way turnout in just under 2 hours! The way back into town my strategy was to just run a steady pace and not worry too much about the time. I was reallllllly tired at this point and didn't need any discouragement from seeing that I was a couple minutes slower on any km/mile markers. 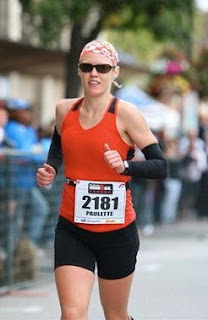 
For food during the day I ate clif bars, clif bloks, gels, sharkies, bananas, gatorade and red bull on the bike. For the run I had 2 gels then stuck with bananas. I tried pepsi, but wasn't a big fan...I go from starving, to full, to bloated to starving again every 2 miles. No nausea or barfing this year at the finish line though! Yay! :) 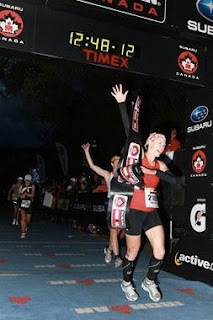 Paulette finished this grueling event ahead of her father with a time of 12 hours, 48 minutes and 12 seconds.  Next on her list is the 2011 Ironman Switzerland in July.
Posted by Unknown at 7:29 AM
Labels: RACING: